Worse Than Objects: The Depiction of Black Women and Men and Their Sexual Relationship in Pornography 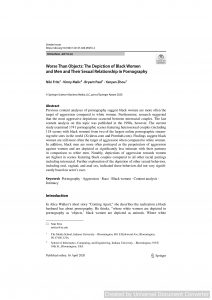 Full Article Name: Worse Than Objects: The Depiction of Black Women and Men and Their Sexual Relationship in Pornography

Previous content analyses of pornography suggest black women are more often the target of aggression compared to white women. Furthermore, research suggested that the most aggressive depictions occurred between interracial couples. The last content analysis on this topic was published in the 1990s, however. The current study examined 1741 pornographic scenes featuring heterosexual couples (including 118 scenes with black women) from two of the largest online pornographic streaming tube sites in the world (Xvideos.com and Pornhub.com). Findings suggest black women are still more often the target of aggression when compared to white women. In addition, black men are more often portrayed as the perpetrators of aggression against women and are depicted as signifcantly less intimate with their partners in comparison to white men. Notably, depictions of aggression towards women are highest in scenes featuring black couples compared to all other racial pairings including interracial. Further exploration of the depiction of other sexual behaviors, including oral, vaginal, and anal sex, indicated these behaviors did not vary signifcantly based on actor’s race.