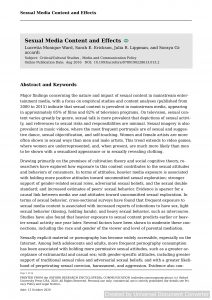 Major findings concerning the nature and impact of sexual content in mainstream entertainment media, with a focus on empirical studies and content analyses (published from 2000 to 2015) indicate that sexual content is prevalent in mainstream media, appearing in approximately 85% of films and 82% of television programs. On television, sexual content varies greatly by genre, sexual talk is more prevalent that depictions of sexual activity, and references to sexual risks and responsibilities are minimal. Sexual imagery is also prevalent in music videos, where the most frequent portrayals are of sexual and suggestive dance, sexual objectification, and self-touching. Women and female artists are more often shown in sexual ways than men and male artists. This trend extends to video games, where women are underrepresented, and, when present, are much more likely than men to be shown with a sexualized appearance or in sexually revealing clothing.

Drawing primarily on the premises of cultivation theory and social cognitive theory, researchers have explored how exposure to this content contributes to the sexual attitudes and behaviors of consumers. In terms of attitudes, heavier media exposure is associated with holding more positive attitudes toward uncommitted sexual exploration; stronger support of gender-related sexual roles, adversarial sexual beliefs, and the sexual double standard; and increased estimates of peers’ sexual behavior. Evidence is sparser for a causal link between media use and attitudes toward uncommitted sexual exploration. In terms of sexual behavior, cross-sectional surveys have found that frequent exposure to sexual media content is associated with increased reports of intentions to have sex, light sexual behavior (kissing, holding hands), and heavy sexual behavior, such as intercourse. Studies have also found that heavier exposure to sexual content predicts earlier or heavier sexual activity one year later. Several factors have been shown to moderate these connections, including the race and gender of the viewer and level of parental mediation.

Sexually explicit material or pornography has become widely accessible, especially on the Internet. Among both adolescents and adults, more frequent pornography consumption has been associated with holding more permissive sexual attitudes, such as a greater acceptance of extramarital and casual sex; with gender-specific attitudes, including greater support of traditional sexual roles and adversarial sexual beliefs; and with a greater likelihood of perpetrating sexual coercion, harassment, and aggression. Evidence also connects pornography consumption to individual sexual behavior, especially among adults. Among adults, pornography use is linked to earlier coital initiation, more frequent participation in specific sexual activities, participation in casual sex, and having a higher number of sexual partners; it has not been consistently linked to condom use.