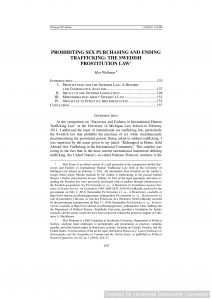 At the symposium on “Successes and Failures in International Human Trafficking Law” at the University of Michigan Law School in February 2011, I addressed the topic of international sex trafficking law, particularly the Swedish law that prohibits the purchase of sex while simultaneously decriminalizing the prostituted person. Being asked to address trafficking, I was surprised by the name given to my panel: “Kidnapped at Home, Sold Abroad: Sex Trafficking in the International Community.” This surprise was owing to the fact that in the most current international instrument defining trafficking, the United Nation’s so-called Palermo Protocol, nowhere is the term “kidnapping” found. However, under the protocol, trafficking can be “the recruitment, transportation, transfer, harbouring or receipt of persons, by means of the threat or use of force or other forms of coercion, of abduction, of fraud, of deception, of the abuse of power or of a position of vulnerability … for the purpose of exploitation.” Consent of the person so trafficked is irrelevant for liability purposes. Now, contrast the trafficking definition to kidnapping, which according to U.S. law occurs when under federal jurisdiction someone “unlawfully seizes, confines, inveigles, decoys, kidnaps, abducts, or carries away and holds for ransom or reward or otherwise any person.” As opposed to this definition of kidnapping, which mostly involves physical force, trafficking can occur when someone abuses a person’s position of vulnerability for the purpose of sexual exploitation. Because most people who are in prostitution are subject to the treatment contained in the Palermo Protocol, which in reality describes pimping as commonly conducted, the U.N. Special Rapporteur on Trafficking (2004-2008) found that prostitution generally is a form of trafficking. Although some people who are trafficked for sex are kidnapped, trafficking is, as suggested below in Part I, more often a problem of social inequality than a problem of kidnapping, and it is linked to prostitution. Further, this Essay will illuminate how the Swedish law against the purchase of sex enacted in January 1999 is based on a similar understanding of sexual exploitation and social inequality. The Swedish law criminalizes only those who buy prostituted persons, not those being bought: “A person who … obtains a casual sexual relation in return for payment, shall be sentenced for purchase of sexual service to a fine or imprisonment for at most one year.” From January 1999 to July 1, 2011, the maximum penalty was imprisonment for at most six months. Before this law was passed, neither the purchase of sex from adults nor being prostituted was criminalized, but procuring sex was. Tangential laws prohibiting the public performance of pornography, as well as regulations concerning communicable diseases, legal aliens, or the compulsory care of young or addicted persons, could at that time be used in the context of prostitution. This Essay considers the potential of the Swedish law against the purchase of sex, with further suggestions for improvements, as a rational response for states parties to the Palermo Protocol. It aims to sort out some of the conflicting claims and misinformation in the international debate regarding the rationales underlying the law, and will document the law’s impact and some of the obstacles found in its judicial application.