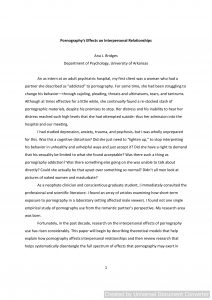 An as intern at an adult psychiatric hospital, my first client was a woman who had a partner she described as “addicted” to pornography. For some time, she had been struggling to change his behavior—through cajoling, pleading, threats and ultimatums, tears, and tantrums. Although at times effective for a little while, she continually found a restocked stash of pornographic materials, despite his promises to stop. Her distress and his inability to hear her distress reached such high levels that she had attempted suicide: thus her admission into the hospital and our meeting. for this. Was this a cognitive distortion? Did she just need to ” lighten up, ” to stop interpreting his behavior in unhealthy and unhelpful ways and just accept it? Did she have a right to demand that his sexuality be limited to what she found acceptable? Was there such a thing as pornography addiction? Was there something else going on she was unable to talk about directly? Could she actually be that upset over something so normal? Didn’t all men look at pictures of naked women and masturbate? As a neophyte clinician and conscientious graduate student, I immediately consulted the professional and scientific literature. I found an array of articles examining how short-term exposure to pornography in a laboratory setting affected male viewers. I found not one single empirical study of pornography use from the romantic partner’s perspective. My research area was born. Fortunately, in the past decade, research on the interpersonal effects of pornography use has risen considerably. This paper will begin by describing theoretical models that help explain how pornography affects interpersonal relationships and then review research that helps systematically disentangle the full spectrum of effects that pornography may exert in interpersonal relationships. Although I will be focusing primarily on romantic relationships, these results often extend to parental, work, and peer relations.