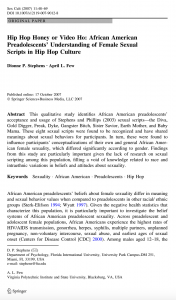 This qualitative study identifies African American preadolescents’ acceptance and usage of Stephens and Phillips (2003) sexual scripts—the Diva, Gold Digger, Freak, Dyke, Gangster Bitch, Sister Savior, Earth Mother, and Baby Mama. These eight sexual scripts were found to be recognized and have shared meanings about sexual behaviors for participants. In turn, these were found to influence participants’ conceptualizations of their own and general African American female sexuality, which differed significantly according to gender. Findings from this study are particularly important given the lack of research on sexual scripting among this population, filling a void of knowledge related to race and intraethnic variations in beliefs and attitudes about sexuality.