Diverse Sexual Behaviors and Pornography Use 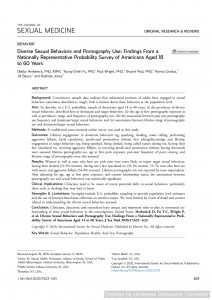 Convenience sample data indicate that substantial portions of adults have engaged in sexual behaviors sometimes described as rough; little is known about these behaviors at the population level.

A confidential cross-sectional online survey was used in this study.

Clinicians need to be aware of recent potential shifts in sexual behaviors, particularly those such as choking that may lead to harm.

Strengths include U.S. probability sampling to provide population level estimates and the use of Internet-based data collection on sensitive topics. We were limited by a lack of detail and context related to understanding the diverse sexual behaviors assessed.

Clinicians, educators, and researchers have unique and important roles to play in continued understanding of these sexual behaviors in the contemporary United States.