Appraising the Impact of Toward a Feminist Theory of the State 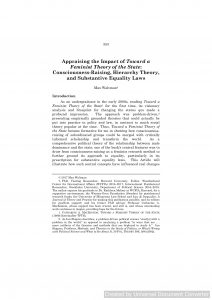 Full Article Title: Appraising the Impact of Toward a Feminist Theory of the State: Consciousness-Raising, Hierarchy Theory, and Substantive Equality Laws

The philosophical, political, and legal impact of Catharine MacKinnon’s groundbreaking work Toward a Feminist Theory of the State (1989) is discussed, specifically the merging of consciousness-raising of subordinated groups with critically informed scholarship, producing a problem-driven approach engaging in informed policy-making. As a comprehensive political theory of the relationship between male dominance and the state, one of Toward’s central features was to draw from consciousness-raising as a feminist research method to further ground its approach to equality, particularly in its prescription for substantive equality laws. The article illustrates how such central concepts have influenced real changes in the world, specifically using legal challenges to pornography and prostitution as examples.

Parts I and II demonstrates how Toward departed from conventional epistemologies, in part explaining its revolutionary appeal to students, practitioners, and scholars. Part III continues the analysis by using real world applications of its approach to pornography and prostitution, beginning with the anti-pornography civil rights ordinances drafted by Catharine A. MacKinnon and writer Andrea Dworkin in 1983, six years before the publication of Toward a Feminist Theory of the State. Part III illustrates how the ordinances mobilized MacKinnon’s same cutting-edge approach to advancing women’s legal substantive equality about which she later theorized. A similar approach was instrumental in grounding a substantive equality prostitution law, proposed by MacKinnon in a public speech in Stockholm, Sweden, November 2, 1990, situating that law within her broader approach to equality. The Swedish national umbrella organization for women’s shelters, ROKS, lobbied for the law and rallied other actors to support it, precipitating its passing in Parliament in 1998, with the law taking effect in 1999. Similar laws have now been adopted by many more countries (attesting to MacKinnon’s extraordinary influence as a legal and social theorist), although not until ten years or more after Sweden’s law, which makes Sweden’s unique data availability a “revelatory case.” Part III concludes by analyzing its comparative impact in terms of reducing sexual exploitation and abuse and offering an exit for people in prostitution, thus promoting substantive equality.

Waltman, M. (2017). Appraising the impact of toward a feminist theory of the state: Consciousness-raising, hierarchy theory, and substantive equality laws. Law and Inequality: A Journal of Theory and Practice, 35(2), 2017. https://ssrn.com/abstract=2992921