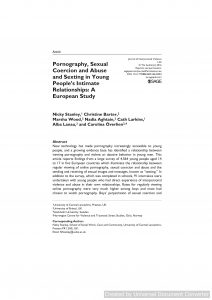 New technology has made pornography increasingly accessible to young people, and a growing evidence base has identified a relationship between viewing pornography and violent or abusive behavior in young men. This article reports findings from a large survey of 4,564 young people aged 14 to 17 in five European countries which illuminate the relationship between regular viewing of online pornography, sexual coercion and abuse and the sending and receiving of sexual images and messages, known as “sexting.” In addition to the survey, which was completed in schools, 91 interviews were undertaken with young people who had direct experience of interpersonal violence and abuse in their own relationships. Rates for regularly viewing online pornography were very much higher among boys and most had chosen to watch pornography. Boys’ perpetration of sexual coercion and abuse was significantly associated with regular viewing of online pornography. Viewing online pornography was also associated with a significantly increased probability of having sent sexual images/messages for boys in nearly all countries. In addition, boys who regularly watched online pornography were significantly more likely to hold negative gender attitudes. The qualitative interviews illustrated that, although sexting is normalized and perceived positively by most young people, it has the potential to reproduce sexist features of pornography such as control and humiliation. Sex and relationships education should aim to promote a critical understanding of pornography among young people that recognizes its abusive and gendered values.