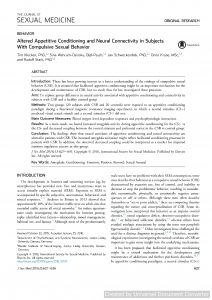 Introduction: There has been growing interest in a better understanding of the etiology of compulsive sexual behavior (CSB). It is assumed that facilitated appetitive conditioning might be an important mechanism for the development and maintenance of CSB, but no study thus far has investigated these processes. Aim: To explore group differences in neural activity associated with appetitive conditioning and connectivity in subjects with CSB and a healthy control group. Methods: Two groups (20 subjects with CSB and 20 controls) were exposed to an appetitive conditioning paradigm during a functional magnetic resonance imaging experiment, in which a neutral stimulus (CS+) predicted visual sexual stimuli and a second stimulus (CS-) did not. Measures: Blood oxygen level-dependent responses and psychophysiologic interaction. Results: As a main result, we found increased amygdala activity during appetitive conditioning for the CS+ vs the CS- and decreased coupling between the ventral striatum and prefrontal cortex in the CSB vs control group. Conclusion: The findings show that neural correlates of appetitive conditioning and neural connectivity are altered in patients with CSB. The increased amygdala activation might reflect facilitated conditioning processes in patients with CSB. In addition, the observed decreased coupling could be interpreted as a marker for impaired emotion regulation success in this group.