Korean Men’s Pornography Use, Their Interest in Extreme Pornography, and Dyadic Sexual Relationships 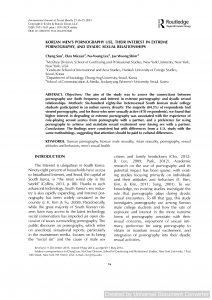 Objectives: The aim of the study was to assess the connections between pornography use (both frequency and interest in extreme pornography) and dyadic sexual relationships. Methods: Six-hundred eighty-five heterosexual South Korean male college students participated in an online survey. Results: The majority (84.5%) of respondents had viewed pornography, and for those who were sexually active (470 respondents), we found that higher interest in degrading or extreme pornography was associated with the experience of role-playing sexual scenes from pornography with a partner, and a preference for using pornography to achieve and maintain sexual excitement over having sex with a partner. Conclusions: The findings were consistent but with differences from a U.S. study with the same methodology, suggesting that attention should be paid to cultural differences.