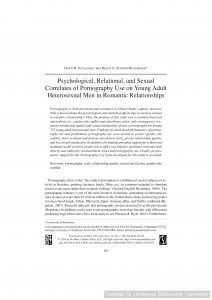 Pornography is both prevalent and normative in United States’ culture; however, little is known about the psychological and relational affects that it can have on men in romantic relationships. Thus, the purpose of this study was to examine theorized antecedents (i.e., gender role conflict and attachment styles) and consequences (i.e., poorer relationship quality and sexual satisfaction) of men’s pornography use among 373 young adult heterosexual men. Findings revealed that both frequency of pornography use and problematic pornography use were related to greater gender role conflict, more avoidant and anxious attachment styles, poorer relationship quality, and less sexual satisfaction. In addition, the findings provided support for a theorized mediated model in which gender role conflict was linked to relational outcomes both directly and indirectly via attachment styles and pornography use. Finally, psychometric support for the Pornography Use Scale developed for this study is provided.