Watching Pornographic Pictures on the Internet 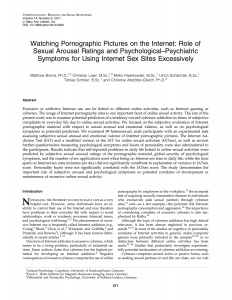 Excessive or addictive Internet use can be linked to different online activities, such as Internet gaming or cybersex. The usage of Internet pornography sites is one important facet of online sexual activity. The aim of the present work was to examine potential predictors of a tendency toward cybersex addiction in terms of subjective complaints in everyday life due to online sexual activities. We focused on the subjective evaluation of Internet pornographic material with respect to sexual arousal and emotional valence, as well as on psychological symptoms as potential predictors. We examined 89 heterosexual, male participants with an experimental task assessing subjective sexual arousal and emotional valence of Internet pornographic pictures. The Internet Addiction Test (IAT) and a modified version of the IAT for online sexual activities (IATsex), as well as several further questionnaires measuring psychological symptoms and facets of personality were also administered to the participants. Results indicate that self-reported problems in daily life linked to online sexual activities were predicted by subjective sexual arousal ratings of the pornographic material, global severity of psychological symptoms, and the number of sex applications used when being on Internet sex sites in daily life, while the time spent on Internet sex sites (minutes per day) did not significantly contribute to explanation of variance in IATsex score. Personality facets were not significantly correlated with the IATsex score. The study demonstrates the important role of subjective arousal and psychological symptoms as potential correlates of development or maintenance of excessive online sexual activity.